Open your heart, open your mind... 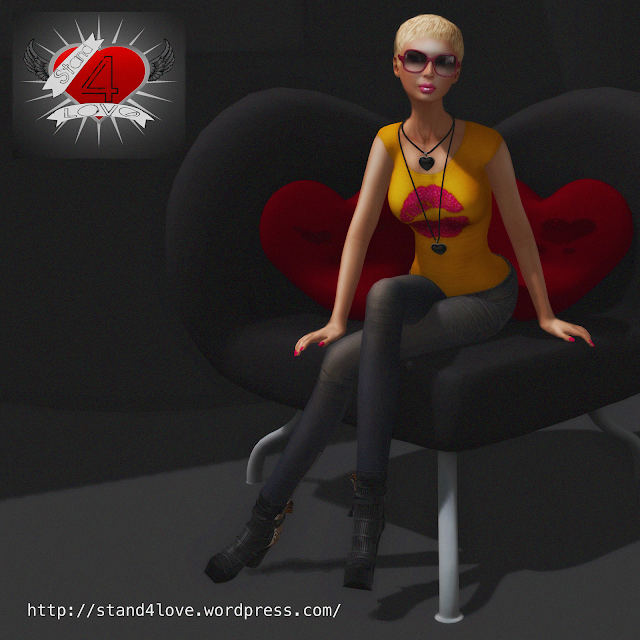 It's a special day for me today because my blog just reached over 20,000 views! Thank you so much! it's an amazing feeling, and incredibly motivating, knowing my work has been seen by so many people from all over the world, so I'm going to keep it up, and hopefully keep it interesting and keep getting better!

As it's a special day, I think the time is right for something a little different. I had a very busy weekend in the real world, and didn't get much time to check out Second Life or Flickr, so when I finally got to log on today, I was so pleased to see a new campaign that's started. STAND4LOVE is the brainchild of Editorial Clarity-Flux, and RicoRacer Flux-Clarity that aims to raise awareness and challenge homophobia, supporting campaigns for recognition of same-sex marriage across the globe.

In Second Life I meet many people who use it as a platform to explore living differently from the way they do in the real world - playing with gender identity and different forms of relationships. While that's a positive in a way, it's also quite sad that people have to resort to an anonymous, online environment to explore these aspects of themselves, usually because of fear of how they would be treated in real life if they were to be open about their feelings.

And we have to acknowledge that, even in the most "tolerant" and liberal of western societies, homophobia, along with other forms of hatred, still functions, still hurts people, and still leaves many people isolated and afraid to be who they really are. Those fears are real.

It's a very topical issue here in the UK, because the Government has announced an intention to legislate to recognise same-sex marriages, and this has brought out many homophobic voices, speaking in the name of the Church, arguing, for example, that gay marriage will undermine the very fundamentals of the Church of England (and, as a result, undermine the very state itself!).

When I was at school, I thought I learnt that the fundamentals of Christianity were to "love thy neighbour as thyself", I really don't recall learning anything about Jesus preaching very much at all about who should or shouldn't love who, or how.

It's always seemd very ironic to me that those voices that shout loudest about preserving the current discriminatory position, whereby lesbian and gay relationships are not afforded the same legal recognition as heterosexual marriage, in the name of Christianity, are strangely silent on the subject of homophobic bullying in schools, as well as the many other forms of hate that are still prevalent in our society - actions that go directly against the doctrine of "love thy neighbour".

I want to live in a world where everyone is free to love and be loved in return, where all forms of love between consenting adults is accepted, respected and valued, and where bigotry and hatred are things of the past. A world that has no place for hate.

So, I have to congratulate Ed and Rico for organising this campaign, and ask everyone who reads this post to do something to show your support - visit the STAND4LOVE blog to find out how to get involved, or facebook like or tweet this post to get more readers - it's a small thing, but small things can make big changes in the end! Open your heart, open your mind, and stand for love today! 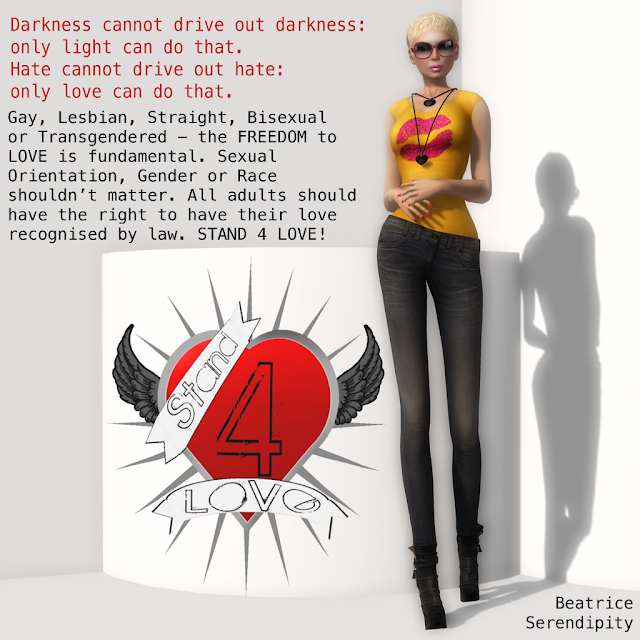