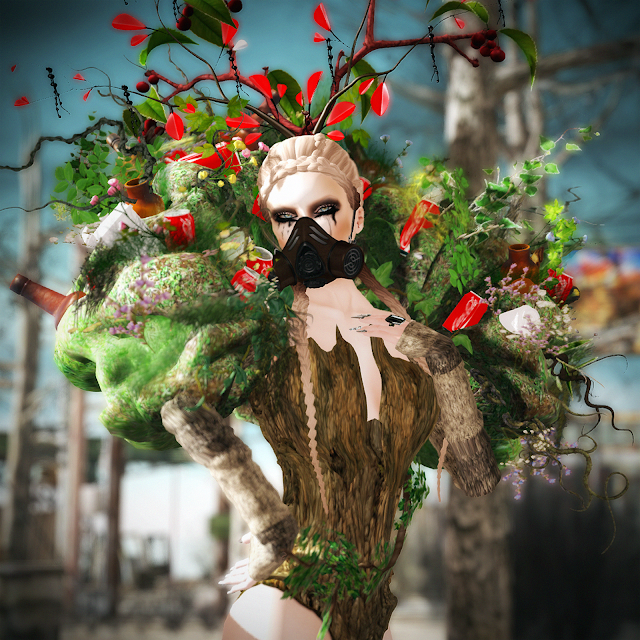 Our fifth challenge for Miss Virtual World was Garbage Couture / Love for Planet Earth - we were told to style an outfit using elements of rubbish, stuff that we would usually throw away, and elements of nature.  I struggled with this one for a while, as various ideas floated round my mind. I toyed with the idea of a newspaper gown, or an outfit made from computer parts, or car parts...but I wanted to create something that blended both elements of the challenge.

In the end, I was inspired by Vivienne Westwood's Climate Revolution campaign to create an outfit that could plausibly be worn in reality to show how human pollution is poisoning our planet. I used full perms to scale coke cans, paper cups, bottles and sweet wrappers that are half buried in the tree-like collar, which is a modified skirt from Boudoir. The tree's leaves are turning the same colour as the coke cans, to further symbolise this toxic relationship, but at the same time, the beauty of nature is not completely destroyed. I kept the rest of the outfit simple - a tree-bark corset and brown boots, as the collar was so detailed, and to give the suggestion of a tree. The thing that really completed the outfit for me was the gas mask - which seemed like just the right finishing touch to really hammer home the message.

We now have just 3 challenges left before the grand finale on 14th December! It is rushing by quite unbelievably fast. People are saying this is maybe the best Miss Virtual World contest ever - and I must admit, the work of the Misses for every challenge has been unbelievable, and it's an honour to be working alongside them. The challenges have been awesome too, and we have Frolic Mills to thank for bringing his creative imagination to stretch us in ways we've never been stretched before!

Next up, we have the Official Press Presentation at 10am on Saturday November 9th - come along and see how we manage to field questions from the press of Second Life!

The Miss Virtual World People's Choice Award is now open for voting - it would be great if you could take a few seconds to visit the website and cast your vote for your favourite Miss!